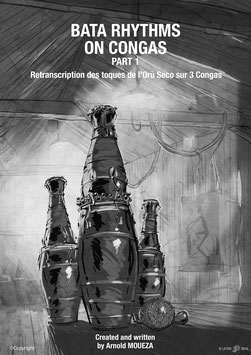 * Warning, the price of the method does not include shipping charges.

Ex:  If you live in the US, south America or Australia, you must add 44€ (Euros) of shipping charges.

Arnold Moueza was born in Algeria on 7 April 1965 of a Guadeloupian father and a French mother.

He started showing an interest in music at a very young age.

At the age of 7 he took one year of drumming lessons at the US embassy in Algiers, where his parents were working.

Then, aged 8, he began a 3-year course studying classical percussion at the Algiers National Conservatoire.

It was not until 1980, on returning home from a trip to Guadeloupe, that he began to focus exclusively on hand percussion, after having been initiated into the GWO KA (the island’s most well-known traditional percussion instrument) and in particular, after having had an opportunity to play with Vélo, the uncontested master of this particular style.

Back in France, he won in 1982 a grant from the Ministry of Culture to go and study music in the US.
In 1983, he joined the MACOUBARY trio, the first French percussion group to introduce Cuban folk music into France, alongside Roger Fixy and Christian Nicolas.

A holder of national diploma as a teacher of traditional percussion, Arnold Moueza has participated in numerous master classes alongside musicians like Randy Brecker, Adam Nusbaum, Miroslav Vitous, Danny Gottlieb, Paco Sery and Willy Murillo.
Arnold taught at the CIM of Paris for 6 years and at the Ile de France Centre of Traditional Music for 4 years.
He is currently offering private lessons for his own personal method for playing Bata rhythms on Congas PART 1, and heads courses or master classes run by French conservatoires and music schools.